HP-UX is a UNIX-based† operating system made by Hewlett-Packard that runs on HP PA RISC.

desktop/workstation: workstations (for those with UNIX familiarity)

“VUE has been replaced with CDE, which debuted with HP-UX 10.10. Starting with 10.20, CDE became the default windowing environment, though VUE was still provided as an option. As of 11.00, VUE is no longer part of HP-UX. The design of the CDE desktop incorporates and enhances many HP VUE features. Although the CDE desktop has a similar appearance to HP VUE, there are important differences. The differences include:” —comp.sys.hp.hpux FAQw75

HP provides strong Internet support within HP-UX, bolstered by its good showing in advanced Internet protocol function and network security, while lagging behind in support for advanced NFS capability. HP-UX, along with AIX, has also established a lead in supporting NDS.” —Digital Equipment Corporation, “AIX 4.3 Leaps To 64-Bits In Dead Heat With Digital UNIX 4.0”w51

HP-UX 11i is a highly secure commercial UNIX operating system that provides the fortification your e-business needs to prevail against hacking and cyber attacks. Designed to enable this new era of Internet-based technologies and e-security, HP-UX 11i can meet your security requirements in the areas of policy, authorization and access control, identification and authentication, audit and alarms, and privacy and integrity.w87

Other system security highlights include:

HP demonstrates its commitment to network security with HP-UX 11i’s rich set of standards-based and directory-enabled network security features that enable you to build your e-business without compromising corporate security:w87 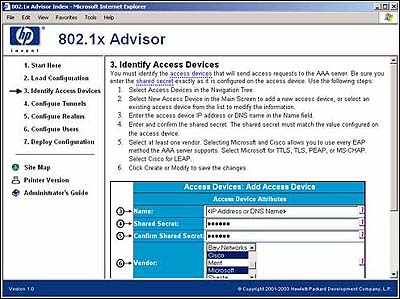 A GUI wireless LAN Advisor provides instructions to configure user based authentication and WEP/WPA key distribution in a wireless LAN environment. This “Advisor” is an HTML tutorial/help system that simplifies the process for securing WLANs with the AAA server.w87

As your enterprise extends outward to include partners, customers and suppliers for information sharing and increased collaboration, you need the protection to allow only the right people in. HP provides this added protection through directory-enabled computing. HP includes Netscape Directory Server for HP-UX with the HP-UX 11i operating environment.w87

NIS+ Server is available as a directory server.w87

“HP-UX 11.0 rates just behind Digital and IBM, complementing its effective 64-bit implementation with a Web-based version of its system management GUI, and competitive reliability and scalability features.” —D.H. Brown Associatesw42†

“Harnessing the demands of e-business. Designed for ease-of-use, power, multi-systems, and high availability, HP-UX 11i system management tools and products are designed to remove the complexity out of system administration. They provide extensive capabilities for allocating system resources among application loads. Hard and virtual (soft) partitions allow multiple instances of HP-UX 11i to exist within one server, enabling application-specific tuning.” —HP-UX 11i Manageabilityw86†

references within this web site

(for your convenience, look for this symbol

HP-UX/Sun Interoperability Cookbook: a detailed comparison of commands, OS calls, data structures, directories, and other parts of Sun-OS and HP-UX, especially for those going from one OS to the other.

AIX/HP-UX Interoperability Guide, Version 2: a detailed comparison of commands, OS calls, data structures, directories, and other parts of AIX and HP-UX, especially for those going from one OS to the other.

SunOS to HP-UX 9.05 Porting Guide: a detailed comparison of commands, OS calls, data structures, directories, and other parts of Sun-OS and HP-UX, especially for those going from one OS to the other.

Price listings are for courtesy purposes only and may be changed by the referenced businesses at any time without notice.


A web site on dozens of operating systems simply can’t be maintained by one person. This is a cooperative effort. If you spot an error in fact, grammar, syntax, or spelling, or a broken link, or have additional information, commentary, or constructive criticism, please e-mail Milo. If you have any extra copies of docs, manuals, or other materials that can assist in accuracy and completeness, please send them to Milo, PO Box 1361, Tustin, CA, USA, 92781.

If you have an extra or unwanted copy of any official manuals or documentation on this operating system, please send them to: Milo, POB 1361, Tustin, CA 92781, USA. I have the following items: NONE.

Note: I am looking for a fan of HP-UX who has the time to check this web site for completeness and accuracy regarding HP-UX. Just check through the site about once a week or so and report back with any information (including the URL of the web page you are reporting).

Click here to skip over the summaries of individual operating systems.

This web site handcrafted on Macintosh

†UNIX used as a generic term unless specifically used as a trademark (such as in the phrase “UNIX certified”). UNIX is a registered trademark in the United States and other countries, licensed exclusively through X/Open Company Ltd.

Names and logos of various OSs are trademarks of their respective owners.

Click here to skip over the summaries of individual operating systems.